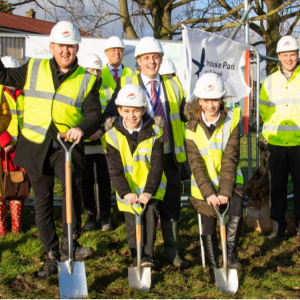 Construction of a new state-of-the-art school building has commenced at the Kidbrooke Park Primary school site/ Kellaway Road, which will replace the current facilities in September 2021.

The Leader of the Royal Borough of Greenwich, Danny Thorpe, was joined by the School’s head boy Mohamed, and head girl Bobbie, as they plunged spades into the ground to mark the start of construction work at a celebratory ground-breaking event.

Cllr Danny Thorpe, Leader of the Royal Borough of Greenwich, said: “Making sure children and young people in our borough have the best education and recreation facilities available to them is key and we’re all delighted to see this improved school building and grounds becoming a reality for residents in Kidbrooke.”

Once complete, the new school site will cater for the pupils of the existing school alongside Kidbrooke Park Learning Centre. The landscaped surroundings will incorporate a multi-use games area (MUGA) and changing block, to ensure pupils are provided with the tools and inspiration to reach their full potential.

Holly Broughton, Executive Headteacher of Kidbrooke Park Primary and Boxgrove Primary said: “Everyone at Kidbrooke Park is so pleased that our new school is underway. We look forward to showing our families and pupils more, as the building progresses and can’t wait to move in. What a fabulous start to 2020!”

Royal Greenwich agreed to invest £15 million to build a new building at Kellaway Road after it became clear that the current school building is no longer fit for purpose and upgrading it was not a cost-effective option.

As part of the event, Royal Greenwich’s Councillors were put through their paces by the head boy and head girl of the school, who interviewed them to find out more about what it is like to work at the top of the Council, how involved pupils will be in the construction of the school and what will be different in the new school.

The Children were taken on a tour of the site and shown where key locations such as forest school, orchard and amphitheatre will be located.

Over the next 18 months, Royal Greenwich’s approved contractor Galliford Try will be working closely with our consultant teams, the school and neighbouring residents to ensure that the new school is delivered to the highest standard, with minimal disruption.